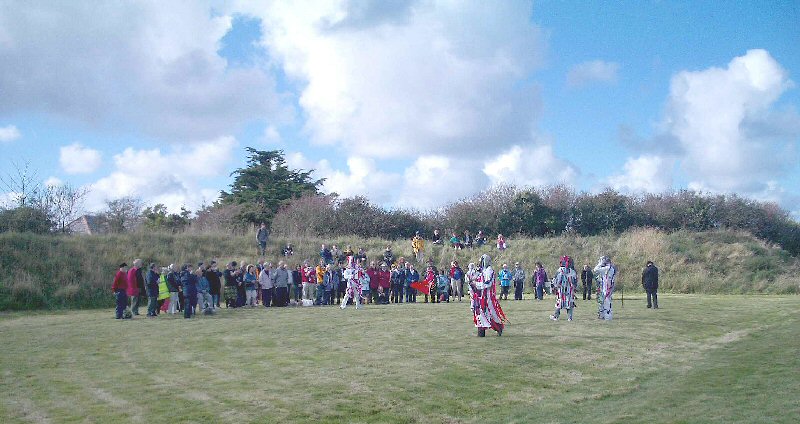 St. Piran Trust has taken over the care of the Mediaeval Playing Place or Plen-an-gwary

Although it’s not signposted it is relatively easy to find 1.2km along the B3285 from Goonhavern (towards Perranporth), on the north side of the road, just off a small lane opposite a pink house.

You can park a car discreetly on the side of the lane, just off the main road. There is open access to the land.

There is a stile into the enclosure where the earthwork stands and a flagstone entrance into the interior.

A small sign gives the following statement, “This St. Piran’s Round is protected as a monument of national importance under the Ancient Monuments Acts 1913-53: Department of the Environment”.

NB: This image is protected under the copyright of the original poster, and may not be re-used without permission.

The earthwork is ‘perfect’. Well kept, a perfect circle, with two opposite entrances, equal height banks, and a decent (if overgrown) ditch on the outside. Birds fluttered and it was all so idyllic, almost too idyllic!

Originally an Iron Age/Romano-British enclosed farmstead it was converted in the medieval period to a Playing Place where miracle plays were performed. The depression in the middle (The Devil’s Spoon) was the place where the Devil sprang from during the performances.

The one enduring feature of Rose is Perran Round which, we are told, has been a focal point of religious and social life for 2000 years; where Druids, Celtic Christians and Catholics, Anglicans and Methodists have all worshipped. It has been described as Britain’s oldest theatre and has been the location for fetes, markets, tea-treats, wrestling matches, political meetings and the Cornish Gorsedd, which was revived in 1928.

The Round is an almost-perfect circle 130 feet in diameter, with an earth rampart 12 feet high, surrounded by a ditch about 6 feet deep. It is, however, an enigma. The archaeologists (who have never dug it up) say it is an Iron Age fortified farm, 2000 years old. It is certainly in the right place, it looks like it could have been a fortification, but there is no record of it until the middle of the 18th Century and it has no Cornish name.

The Round is shown of Martin’s Map of Cornwall in 1747, and in 1750 William Borlase wrote a detailed description of it, with diagrams, and said that it was used for the performance of mediaeval miracle plays in the Cornish language. He describes it as having 7 seats and refers to it as a “Plen an Guare” or playing place. Whenever or however it originated, there is no doubt of its importance in the life of the village for several hundred years.

During the Dark Ages, the heyday of the Celtic Christian Church, the pilgrim’s road to St Piran’s Oratory passed through Perranround, a mile or so before they reached the barren and windswept sand dunes. The “Lost Church” (as it is now known) had become, like St Michael’s Mount and St Day, a place of pilgrimage: at first attracting mainly locals. From the 11th Century onwards pilgrims came from as far away as Wales, Ireland and Brittany. St Piran’s Day was kept as a holiday all over Cornwall. There were stone crosses and signs by the roadside marking the way from Padstow (for the Welsh and Irish), and from Fowey (for the Bretons) to Perranzabuloe.

At Perran Round the pilgrims, and others, were entertained by plays in the Cornish language, which all could understand. These plays portrayed the story of the Bible and its people as well as the lives of several Cornish Saints: many of these plays would have been performed over a period of several days. Between performances they would have camped out in the Round or stayed in the local hostelry or with the monks near the Church if they had enough money. They would also have attended the Gulmur (Great Fair), which was held in a field at the top of Reen Lane opposite the Chilcotts. Rosillians have been welcoming tourists in their midst for hundreds of years.

Perran Round is now the only survivor in Cornwall of several hundred rounds, and in 1969 a revival of the Ordinalia was performed by students from Bristol University. An unforgettable experience which very graphically portrayed many aspects of the Bible story. The actor playing the part of Jesus practised hanging on the bars in a gymnasium for three hours or more each day for six months. Heaven was up on the bank and Hell was in the Northern gap; every so often the Devil and his army rushed out breathing fire! It is thought that in the Middle Ages the “Devil’s Frying Pan” (not spoon like they keep trying to tell us) was used as Hell. The pan and the handle were much deeper, and the handle was covered so that the actors could move along it and spring up centre stage to create greater effect. Tradition says that if you run round the frying pan seven times, then put your ear to the ground in the middle of it, you can hear the Devil frying.

Ever since John Wesley visited the Parish in 1753, Perran Round has been used for open air services, and part of the bank opposite the frying pan was dug out for use as a pulpit. From the time the Methodist Society was formed at the end of the18th Century, the Chapel held an Anniversary Service there every Whit Sunday afternoon. It was here that the Sunday School held their afternoon Anniversary Service at the beginning of July, and where occasionally the Sunday School and the Band of Hope held their Tea Treats.

Perranround was also the venue for another traditional Cornish pastime, that of wrestling; the village produced a number of good wrestlers. The most well-known were the Hooper family, who emigrated to Northern Michigan about 90 years ago; the last one of the line here boasting the name of “Tommy Toots”.

For many hundreds of years, until the latter part of the 19th Century, Perran Round was in the middle of open countryside with a road running right through the middle. With the increase in heavy traffic because of the mines transporting their ore to be smelted, and the enclosure of the fields due to the modernisation of farming, as well as the ability to plough deeper and cultivate heathland like that in Stile Lane, which had not been cultivated before, the villagers had to make a decision. James (Butcher) Penna, who was one of the main carriers from the mines at Mount, got together with his father, James from Hendravossan, and his uncle Richard from Hendragoth, and with others they had to decide whether to continue to drive through the Round – and destroy it – or divert the road and go round it.

The Boundys and the Davises with some of the Pennas (who were miners) provided the labour and diverted the lane from Stribley’s (later Taylor’s and Blitchford’s) shop to pass to the right of the Round. The farmers hauled the stone from Budnick Mine and Crows and Carn (Treamble) Quarry, and the workers crushed it on site to make the road. For many years after this, hardcore for the roads was kept in the open space outside the Round and various contractors with traction engines would crush it and take it wherever it was needed.

In the years before the First World War, Perran Round was the location for political rallies and demonstrations held by the Tory and Liberal parties. At one of the Tory rallies the chair was taken by the headmaster of Perranporth School; my Great Grandfather William Hubber, a staunch Wesleyan and a man of peace, was so incensed by this that he jumped on the stage and punched him to the ground. When asked why, he replied that it was hypocritical that a man whose livelihood depended on the workers should be supporting the bosses and he needed a lesson.

Between the wars the Round became neglected and in the early 1930’s the Perranzabuloe branch of the Society for the Preservation of Rural England reported that it had been used as a dumping ground for tins, rubbish and caravans, and undertook, with the help of the people of Rose, to keep it clean. Their work proved to be of value as, during the Second World War, the Round became the training ground for the Rose Platoon of the Home Guard, whose headquarters were in the tea-rooms across the lane.

In 1951 the Round was used for the Parish Celebrations of the Festival of Britain, a very Cornish celebration under the Chairmanship of Tom Tremewan, with Cornish songs and dances, and Cornish Wrestling with Geoff Menadue (from a good Rose family), the Cornish Middle-Weight Champion. The afternoon also featured a performance of “Bewnans Meriasek” (the life of a Cornish Saint), probably the first time such a performance had been given in the Round for over 300 years, and a finale by the Skinner’s Bottom Male Voice Choir.

After this, as many of the older generation of Rosillians died and the younger ones moved away, the Chapel and the Sunday School used the Round less and less for their Anniversaries and it became disused and overgrown. But in 1968 it took on a new lease of life when the County Council took it over for the Ordinalis in 1969. It lasted five years as a theatre until an injunction from a newcomer to the village, who objected to the noise, forced it to close.

In the summer of 1983 the villagers got together again and decided to clear the Round, which had become completely overgrown, and the following year held their first fete and a religious service there. This was followed in 1985 by the Gorsedd of the Bards of Cornwall, the fourth time it had been held there. The Round is now in better condition than it has been for many years; long may it remain so! Certainly since then, it has been used regularly and is maintained to its present high standard by a small group of villagers under the auspices of Rose Men’s Institute, who were pleased to welcome the 1992 Gorsedd.